Using the new Manager app is compulsory for all teams in Townsville Touch Football competitions from the commencement of the 2021 summer season.

The app, which was developed by TTF partner KH Digital, allows team managers and coaches to record their players for each match, to ensure they are covered by insurance (in case of injury) and are qualified to play in the finals series.

TTF Team Manager can be accessed on your smartphone or tablet, or your laptop or desktop computer.

Please note: the app is not available from app stores. Please read the information below to find out how to install it to your phone.

1. Get your TEAM CODE

Ask your club or Competition Administration for your TEAM CODE, which is a sequence of six (6) letters and numbers.

You can use your code on multiple devices, so each team’s coach and manger can both have access.

Each team has a unique code, so keep yours safe. If someone else knows your team’s code, they can make changes to your team’s roster without your permission or knowledge.

2. Open the APP on your phone’s web browser

On your phone’s web browser, open to the URL below:

The first time you visit, you’ll open to the login screen, which will look similar to the image below. 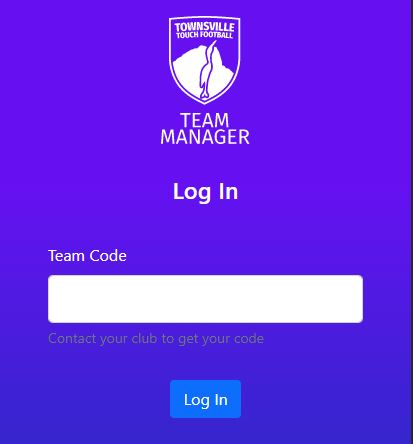 The app is built to work best in up-to-date versions of Apple‘s Safari, Google’s Chrome, and Mozilla’s Firefox web browsers apps. Your experience may vary in other or out-of-date browser apps.

If you coach or manage more than one team, the app will remember all of them for you!

4. (Optional) Install as an app

The TTF Team Manager app is a simple website, so it can be access on you smartphone and tablet, as well as your laptop and desktop computer.

If the app doesn’t appear, it means your phone’s browser can’t install it, but you can still continue to use it the way you already are.

Once installed, you’ll be able to find the “Manager” app on your home screen or in your app drawer (depending on your type of smartphone).

Please note: the app is not available from app stores, it can only be installed via the URL: https://manager.tsvtouch.club

Your first task once you’ve logged-in is to create your playing roster, which will currently be empty.

To add players to your roster, tap the menu button () and go to My Team.

Under the Playing Roster, tap the “Create New Player” button and enter their shirt number, as well as their first and last name’s.

This information cannot be changed once you enter it, so make sure you get all shirt numbers, and spelling correct!

Your next match will be displayed at the top of the Dashboard. Tapping on it will let you manage your playing roster for that match.

You can also view your team’s full match schedule (when it’s released by TJT) by tapping the menu button () and going to Match Schedule.

When viewing your current match in the app, you’ll be able to manage your playing roster.

You'll only be able to do this on the day of the match, and each match is open from midnight onwards, but automatically closes 30 minutes after your match finishes, so don’t forget! 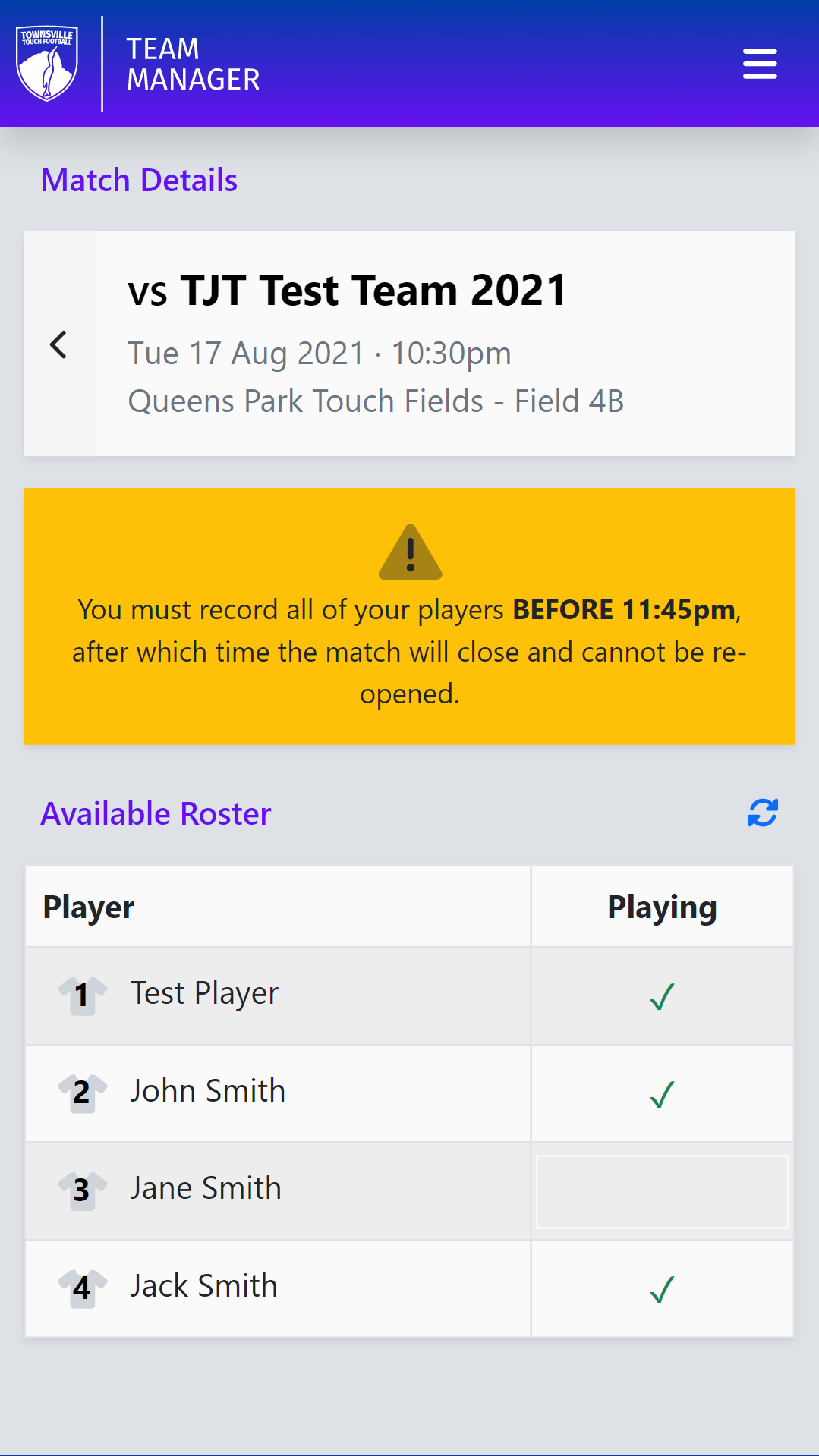 To record a player as “playing”, just tap on the empty space next to their name (under the “Playing” or “Played” heading).

A green tick will then appear, indicating that you have recorded that player as having played that match.

If you make a mistake, just tap on the incorrect player’s tick and it will disappear.

Every time you “tick” a player, they are saved and recorded automatically, so there’s no “save” button that needs to be pressed

8. Switch to another team

If you coach/manage more than one team, just tap the menu button () and then tap the ”Log Out” button.

Your previous team/s will be shown under the “Quick Login” heading, and all you need to do is tap on your team to quickly return to its dashboard.

To add a new team, just enter the new TEAM CODE into the box and log in. After your first login, it will be remembered.

If you experience any issues while using the app, report them to your club or Competition Administration so they can investigate.

Where possible, provide a screenshot of any error messages!

Note: Your club and TTF won't help you record your players if you forgot to do them in time. Once the match closes (30 minutes after full time) it cannot be re-opened.